Tehran's air pollution has reached maximum levels because of thermal inversion. Unmarried 30-something Niloofar lives with her aged mother, and stays busy with her alterations shop. When doctors insist that her mother must leave smoggy Tehran for her respiratory health, Niloofar’s older brother and sister decide that she must also move away to accompany her mother. Niloofar is torn between family loyalty and living her own life and pursuing a potential love interest. She is the youngest and she has always obeyed their orders, but this time she must stand up for herself. 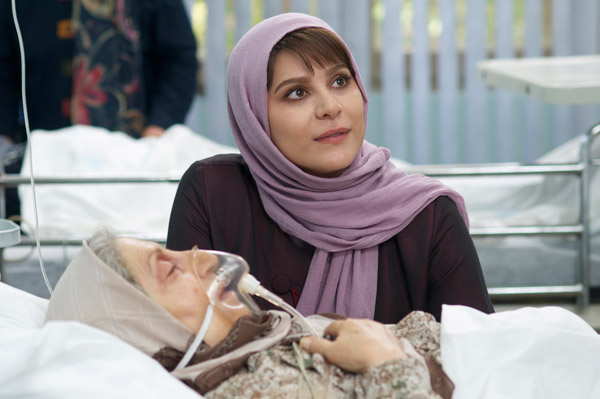 Tehran is one of the most polluted cities in the world, and the pollution reaches its peak on the days when there is thermal inversion. On such days, the situation becomes critical and it is even hard to breathe. We all notice the air pollution only on such days but we forget it after a few days. In fact, we don’t forget it, we get used to it. We get used to it because if we work or live in this city or like this city for any reason, we do not have another choice. And we have got used to not having a choice.
Niloofar in my story is one of the people in this city; someone who has never had the right or the chance to choose, and she has got used to not having them. Now she needs the inversion to remind herself and the others to respect her pleasant right to choose.
Her choice, like anybody else’s, might be wrong or costly, but what matters to her is that she feels she has the right to choose; rights that she may not want to use, but only when you lack something, you realise its importance, and to get it, you are willing to lose anything.

ORIGIN OF THE PROJECT

A few years ago on one of the polluted days in Tehran, I saw a young girl who, like many other people, was wearing a mask on her nose and mouth, and was walking on the pavement. When she passed by me, I noticed she was sobbing. Her tears had wet a large part of her mask. Only her big bloodshot and tearful eyes could be seen, and she was oblivious to her surroundings. When she passed by me, the first thing that came to my mind was that, maybe more than as a solution to the air pollution, she was using the blue mask to protect herself against the reproachful gazes of the society that scolded the young girl for displaying her emotions in the public. Maybe she had hidden a large part of her face behind the mask to be able to pour out her feelings. Maybe she was practicing to get her share from the street, city, and society. Maybe she was a sign. Now after a few years, her image is still vivid in my mind. An image that stayed with me in a smoke-filled day in Tehran became the starting point of this film.

Iranian society is in a difficult twisty path between tradition and modernity, and it tries hard to pass and resists obstinately to remain in this duality. As the smallest unit of society, the family can be a small model and example of a society with all its characteristics. I have always wondered if what goes on in our familial relations and between us individually is the reproduction of what is going on in its larger model - society - or conversely, humans - after the elevation of their positions and their effectiveness - exert the same beliefs and behaviour they have in their individual and familial circles to society and give form to it. Whatever the answer, the result is the same; their models are very close. However, the new generation of Iranians - and especially women - are in a constant effort to change their status and role and go beyond the framework set for them. Higher education, acquisition of new knowledge, working, and financial independence play a significant role, and the statistics indicate their fast and unprecedented growth. With such an approach, they do not submit to the past models, and they try to gain new rights and positions even if traditions, beliefs and the law act against them.

A SLICE OF LIFE

Some of my role models in cinema are those who have opened new ways in cinema and presented different forms of filmmaking and relating a story. I teach classic models of scriptwriting and cinema to my students in university, and I tell them each time how they can go beyond those models and make their own films. One of my serious yet enjoyable goals in filmmaking is the reduction or change in the familiar models. That is what I have tried to do in Inversion. Few people around me have experienced a calamity or a disaster, but I don't know anybody who has not undergone change in one or another phase of their life. When I see such people, I ask myself every time if I can make a film that instead of using the classic model of screenplay with the disastrous event and big turning points, to be close to the life and at the same time to have an interesting story and theme to attract the audience. Bearing that in mind from the first sentences of the screenplay to the last moments of the film, I tried to discard or reduce whatever that made the film too theatrical, and to invite the audience to watch a slice of life itself. Therefore, I chose a certain form of directing and visual storytelling that like the other elements of the film, has its own function without drawing much attention to itself. During directing of the film, although the familiar model of a realistic film tempted me to employ a specifically documentary-like image, I tried to place the audience in the scene like a viewer, to the extent that they forget the camera, get close to the characters, and be in the centre of the film’s atmosphere. So I reduced its cinematic structure to simplification as much as I could, so despite the numerousness of the sequences and the immobility of the camera, it would have a real and even improvised feeling. Inversion was a ‘mood’ film for me since the beginning; the mood of Niloofar, the people around her, and the crowded smoke-covered city of Tehran, and I hope the mood will be conveyed to the audience.

WORKING WITH THE ACTORS

For directors like me, who have used non-actors in almost all my previous works, working with a number of professional actors was a new experience, an exciting and wonderful experience. During the casting, the actors were chosen very quickly. Sahar Dolatshahi was the first choice for the role of Niloofar. She might be less known to the audience outside Iran, but in Iran, she is one of the best and most renowned theatre and cinema actresses and she has worked with many great names. I have known her for many years ago and I had seen her performances in theatre and cinema, but I got to know her rare talents and abilities when she merged with this role and turned into Niloofar. During those days, we spent a lot of time with Sahar to review what Niloofar liked, including her favourite music. I found out later that during production, she listened only to Niloofar’s favourite music, and it was a part of her method to get close to the role.
I talked to Ali Mosaffa about the role of Farhad when I was writing the screenplay. During two decades of playing in Iranian cinema, he has worked with almost every big name. His was recently seen in The Past by Asghar Farhadi. He is also a scriptwriter, director, and producer, and his films have gained much attention and achievements inside and outside Iran. Farhad in Inversion is in a way the opposite of the characters of Ali Mosaffa in most of the roles I had seen from him, and it was a challenging and interesting issue for both of us. Ali, however, is a very intelligent and professional actor. For me, he is the personification of acting. That is, ‘being’ instead of ‘acting’. This is what I expect from my actors and Ali has it at the maximum level.

Cinema has a strange and exceptional situation in Iran. A few thousand short and documentary films and nearly 250 feature films are made in Iran every year. A large part of these films are mainstream and a small portion belongs to the independent artistic or experimental cinema, and a few of them enter the international festivals and distribution circles, and this cinema is still living and active. Probably Iran is one of the few countries where you can still see long queues at cinemas, audience-packed halls, and midnight screenings, and of course, the enormous excitement and passion of the young audience.
In a corner of this cinema and outside the frenzy of production and screening, there is Iran’s independent cinema, where people like me make their films with their personal investment or the small financial support outside the governmental and studio system, and some international independent companies distribute them. Although my experience in the independent cinema has been associated with the back-breaking hardship of making every film and moving towards the next film, I am glad that I have been able to follow my personal trend without becoming dependent.
During the past few decades, the Iranian cultural and independent cinema has luckily reached a status that today, even the experimental and elite cinema of Iran has found its fans both inside and outside Iran, and it has its own place in the cycle of production and distribution. 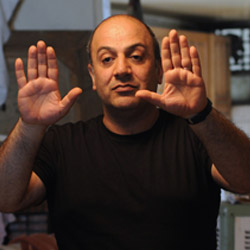 Born in 1972, Behnam Behzadi started his career as a photographer and theater player at the age of 15. He graduated from the Faculty of Cinema and TV in Tehran with a BA degree in filmmaking. He has made more than 20 films including shorts, TV movies and documentaries, some of which won various awards in international film festivals, especially his first feature, BEFORE THE BURIAL in 2008. His previous film, BENDING THE RULES won 2013 Special Jury Prize in Tokyo IFF, Audience Award in Nantes and Special Prize in Mannheim. It was well received and admired in different festivals around the world. Behzadi teaches Cinema at Tehran University of Art and has published many related articles.